The musicians of the Staatskapelle Berlin 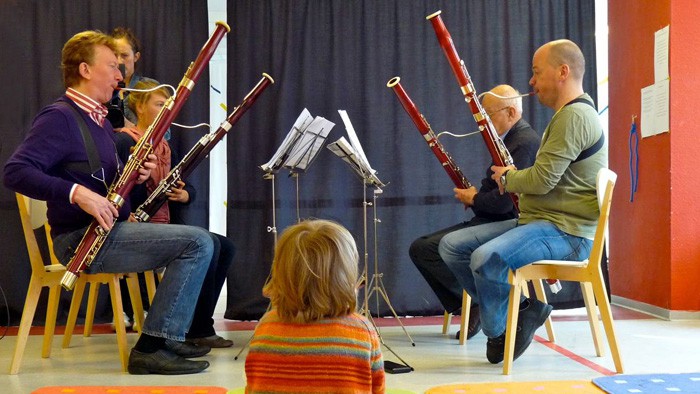 The musicians of the Staatskapelle Berlin support the kindergarten musically as volunteers. For more than twelve years they have been coming, week after week, to play, show, and explain their instruments to the children.

The musicians strive to teach the children how to listen, to help them experience music as an aesthetic but also natural means of grasping the world, to develop their ability to make distinctions, and finally to help them build all kinds of bridges to music – and from music to the rest of the world.

During their weekly visits, the musicians introduce their instruments to the children, play for them well-known songs, and expand their listening habits with classical and contemporary repertoire. Toward the end of each Kindergarten year, the children prepare a large project, during which they work with the kindergarten’s teachers, the Staatskapelle musicians, and children from the kindergarten’s other groups.

We use cookies on our website. Some of them are essential for the operation of the site, while others help us to improve this site and the user experience (tracking cookies). You can decide for yourself whether you want to allow cookies or not. Please note that if you reject them, you may not be able to use all the functionalities of the site.